Ovarian cancer is cancer that begins in the cells of the ovary, fallopian tube, or peritoneum. The cancers are closely related and are treated in the same way. Certain cancers occur when healthy cells in these places begin to alter and grow out of control, resulting in the formation of a tumor. Tumors can be malignant or benign. A malignant tumor has the ability to grow and spread to other parts of the body. The term "benign tumor" refers to a tumor that can grow but does not spread.

An ovarian cyst is a tissue development on the surface of the ovary that develops abnormally. It can occur at any point throughout a woman's regular menstrual cycle and usually resolves on its own. 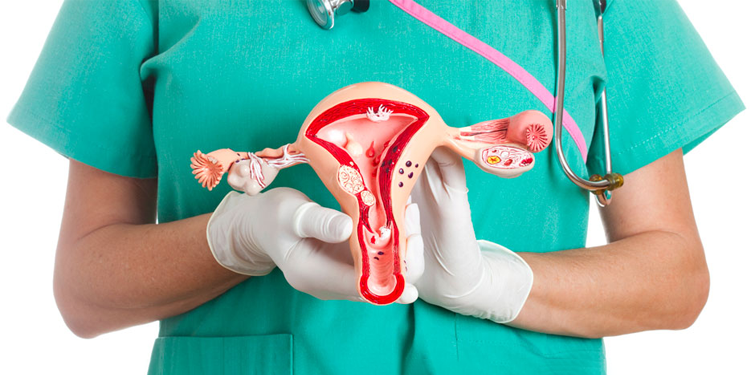 What are the Ovarian Cancer Symptoms?

Most ovarian cancers begin in the epithelium, or outer lining, of the ovary. In the early stages, there may be few or no symptoms. These symptoms may be misdiagnosed with premenstrual syndrome, irritable bowel syndrome, or a temporary bladder infection. If these symptoms are not treated, they can worsen and lead to ovarian cancer.

Ovarian cancer symptoms can appear at any stage, although they are more common in the later stages when tumors press against the bladder, uterus, and rectum.

The following are the most prevalent ovarian cancer symptoms:

What is the cause of ovarian cancer?

Ovarian cancer can also be passed down through families. If you have a strong family history of ovarian or breast cancer, you may have a BRCA1 or BRCA2 gene mutation.

Stage 1 is limited to either one or both ovaries.

Stage 2 cancer has progressed to one or both ovaries and elsewhere in the pelvic.

Stage 3 involves one or both ovaries, as well as the lining or lymph nodes of the abdomen.

Stage 4 ovarian cancer has metastasized or spread to distant organs and is considered advanced.

TVUS (transvaginal ultrasound): TVUS is a type of imaging test that detects tumors in the reproductive organs, especially the ovaries, by using sound waves. However, it cannot assist doctors in evaluating whether tumors are malignant.

CA-125 cancer antigen (CA-125) blood test: CA-125 is a biomarker that is used to assess therapy response in ovarian cancer and other malignancies of the reproductive organs. It is a blood test that evaluates the levels of cancer antigen 125 (CA-125). Menstruation, uterine fibroids, and uterine cancer can all affect CA-125 levels in the blood.

Biopsy: A biopsy is a technique in which a small sample of tissue from the ovary is collected and examined under a microscope.

Surgery may be done to confirm the diagnosis, determine the stage of the malignancy, and maybe remove cancer cells. The surgeon may attempt to remove all malignant tissue during the operation. A biopsy can be performed to determine whether cancer has spread. The surgery's duration will most likely be dictated by the woman's wish to become pregnant in the future.

Ovarian or fallopian tube cancer can be surgically treated in a variety of methods. These are some examples:

Lymphadenectomy/lymph node dissection: During this operation, the surgeon may remove lymph nodes in the pelvic and paraaortic areas.

Omentectomy: During surgery, the thin tissue that protects the stomach and intestines is removed.

Cytoreductive surgery is performed on women who have metastatic cancer, or disease that has progressed to another section of the body. The goal of cytoreductive surgery is to remove as much tumor as feasible while maintaining the patient's health. This may entail removing tissue from adjacent organs such as the spleen, liver, and a piece of the small bowel or colon. It's also possible that some of these organs will be removed. This technique may help alleviate a person's symptoms because it removes masses that may be pressing on other organs. It has the potential to boost the efficacy of other post-surgical treatments, such as chemotherapy, in treating the disease that lingers after surgery. If cancer has gone beyond the ovaries, fallopian tubes, or peritoneum, doctors may utilize Neoadjuvant chemotherapy to decrease the tumor before cytoreductive or debulking surgery.

Chemotherapy: These drugs are used to kill cancer cells. Chemotherapy drugs affect the entire body, whether taken orally, as an injection, or as an infusion. Another option is intraperitoneal chemotherapy. The drug is administered directly to the malignant part of the body via a tube in this situation. Chemotherapy can have a wide range of side effects, especially if given to the entire body.

Cancer medicines that target specific cells that contribute to the spread of cancer are known as targeted therapies. The goal of focused therapy is to limit side effects by concentrating on certain processes.

Radiation therapy: In this process, X-rays are utilized to eliminate cancer cells. One method is to inject a radioactive liquid into the peritoneum. This therapy option may be beneficial for people with advanced ovarian cancer.